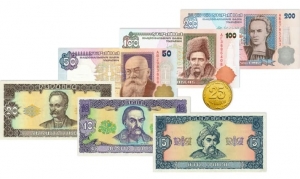 The National Bank of Ukraine presented future changes in the hryvnia banknote and coinage: coins with a denomination of 25 kopecks and all old banknotes introduced into circulation before 2003 will cease to be legal tender in Ukraine - from October 01, 2020.

That is, from October 1, 2020, all shops, restaurants, the service sector must stop accepting them, and the remains of such coins and banknotes must be returned to the cash desks of Ukrainian banks by October 16 for crediting to accounts.

It will not affect customer service, since in the absence of coins with a face value of 25 kopecks in cash, the rules for rounding the total (in a check) amounts of cash settlements for goods, works or services to amounts divisible by 10 kopecks (according to the rules determined by the resolution of the Board of the National Bank of Ukraine dated March 15, 2018 No. 25 "On optimization of circulation of coins of small denominations").

And old-style banknotes, introduced into circulation before 2003, almost no longer fulfill their function of a means of payment. Now about 1.8% of the total number of banknotes in circulation remain in circulation. Over the past three years, their volume in circulation has remained almost unchanged. That is, they almost do not pay, these banknotes are not collected and are not received by banks.

More in this category: « UKT VED code and others

36About the CashFront- front-office of cashier

Error: index was out of bounds of array
View the check and return the check
How to password protect a directory database from tampering
Deferred checks
Selling on of commodities an account
Dining in accounting CashFront
Tuning of colors of interface
Changes are in the editors of the articles, discount card
Tuning of interface
Errors at the use of authorizing of operators

Printing in COM-port
Use of template *.RTF for printing of price-lists
Additional menu "Run"
Library Com server weights for AD, AP, DB, EM, ER, EMR
Connection of scales of CAS LP - CL with printing of labels to CashFront
Setting up printing on fiscal printers "Shtrih-M"
Setting weights "Mettler Toledo"
Formatting of check(tuning of printing)
Limitation of rights is in CashFront

9Integration of CashFront with other SOFTWARE

Comparison of touch screens
Acoustic Pulse Recognition(APR) is unique sensory technology
IntelliTouch is technology of superficially-acoustic waves (FALLING)
AccuTouch is capacitance-resistance sensory technology
How to choose a barcode scanner?
Terminal of collection of данных- that needs to be known
Equipment and SOFTWARE for automation of trade
About automation of trade in modern shops
Connecting customer display
Utility of RunAs : simple starter of appendixes

Defence of passwords
How to transform PDF file in Word
Limitation of directory rights in OS of Windows 7
Tuning for OS of Windows 7 and Vista
New in the bar-coding
Are the cash programs a helper or hindrance?
About discounts

Repair of computers is in Chernivtsi.

Do not miss our news!