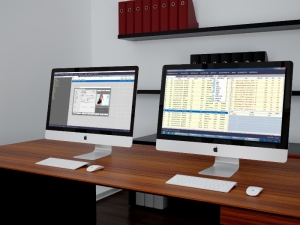 Sensory monitors are offered in different acquisition: c by the capacitance-resistance screen of AccuTouch, with the abat-voix of IntelliTouch and with a screen on technology of APR. What difference and features are in them?

Technology AccuTouch developed for the use in the conditions of aggressive environment, therefore the touch screens of AccuTouch excel other screens at reliability and longevity. Capacitance-resistance screens possess maximal firmness to contamination. This feature allows AccuTouch to be not afraid of hit on the working surface of liquids, runback, steams - and reliably to work, when other types of screens fall out. A screen maintains 35 million touches to one point.

In basis of touch screens IntelliTouch original technology is fixed, using principle of superficially-acoustic waves. A screen presents from itself a glass panel, that allows to get a maximally quality image on Your sensory monitor. The surface of screens of IntelliTouch is able to resist to the mechanical damages. Touch to the screen a finger, by a hand in a glove or стило and you will get an exact answer for a touch. Touch screens of IntelliTouch oneself was perfectly shown in trade, sphere of educating, intellectual building.

A company Elo TouchSystems worked out absolutely new and unique technology of touch screen of Acoustic Pulse Recognition(APR) is Recognition of acoustic impulse, that unites in itself all best qualities of sensory technologies of AccuTouch and IntelliTouch :

Compare on principle of work and you will be able to be determined what screen anymore befits you:

Executed in accordance with geometry of monitor, the screen of AccuTouch consists of the glass panel covered by the layer of plastic. Space between glass and plastic is separated by микроизоляторами that is evenly up-diffused on the active area of screen and reliably insulate conducting surfaces. At an easy touch surfaces adjoin. A comptroller registers the change of resistance, will transform him in the coordinates of touch(X and Y) and passes them on the system tire of computer.

As a comptroller determines the coordinates of touch

When a comptroller expects pressure, capacitance-resistance coverage of touch screen is under tension +of 5В, and подложка is earthed, due to микроизоляторов between these surfaces high resistance is saved. When nothing touches a touch screen, tension on подложке is equal to the zero. Level of tension of подложки constantly преобразовывется by an analog-to-digital transformer(ADC) and watched by the microprocessor of comptroller. When to the screen touched, a microprocessor caught the change of tension of подложки and begins to calculate the coordinates of touch as follows: A. A microprocessor determines tension on the axis of Х by the serve of tension +of 5В on the contacts of H and X and earths the contact of Y and L. Value of tension, proportional Х appears the coordinate of touch on подложке and fixed on the contact of S of socket of screen. This tension is digitised through ADC according to the algorithm of усреднения and then temporally saved for a transmission on port(host). B. After it a comptroller does a the same operation for the axis of Y. Accordingly, by the serve of tension on the contacts of H and Y and grounding of contacts of X and L, got on the contact of S tension is also digitised, becomes level and saved for a subsequent transmission in port.

On the glass panel of screen, corresponding form of matrix of monitor, on corners пьезопреобразователи is located in non-working part. A comptroller sends an electric signal on transformers that convert a signal into an acoustic wave. An acoustic wave passes on the surface of glass panel and reflected by the array of sensors on a perimeter. Receiving sensors collect the reflected wave and direct it back onto пьезоэлементы. A wave will be transformed in an electric signal that is analysed by a comptroller.

At a touch to the screen part of superficial wave is taken in. The got signal is compared to the standard, changes are determined, coordinates are calculated. This process comes true independently on two axes - X and Y. The feature of IntelliTouch is possibility to determine force of touch - coordinate of Z. Coordinates are passed in a computer.

Technology of APR works by a simple and elegant method - by recognition of sound in the moment of touch of screen in a certain point.

Touch-control generates an unique sound in any point of screen. Four tiny sensors, touch screens envisaged on edges, accept a touch-control signal. A sound is digitised, after passed by a comptroller and compared to the list of before writtenin signals for every point of screen. A cursor instantly moves pithily, corresponding to the place of touch. APR ignores the sounds of environment and any external sounds, if they are not included in the before stored list. APR differs from previous developments the method of voice recognition of position of touch with the use of microphones, because this method much more comfortable and simpler for настольных vehicles, what application of powerful and expensive method of calculation of signal by the programmatic calculation of tangency without some another possibilities of application of references. Therefore APR technology is more effective in correlation price-quality, and more economical for large screens. Now APR technology includes combination of the best descriptions of technologies of AccuTouch and IntelliTouch. Earlier such not arrived at in not a single sensory development.

Although APR is NT - placed she very looks like very popular 20 back IntelliTouch. Both developments use a surface from the real glass with the envisaged sensor. However, if sensors, transforming and accepting signals, are used in IntelliTouch, then in APR they only "listening".

Warning: count(): Parameter must be an array or an object that implements Countable in /home/cashfron/cashfront.net/www/components/com_k2/templates/defaltCF2/item.php on line 279
Read 2887 times
Published in Automation of trade
Tagged under

More in this category: « AccuTouch is capacitance-resistance sensory technology How to choose a barcode scanner? »
back to top
Sensory monitors, touch screens

36About the CashFront- front-office of cashier

Error: index was out of bounds of array
View the check and return the check
How to password protect a directory database from tampering
Deferred checks
Selling on of commodities an account
Dining in accounting CashFront
Tuning of colors of interface
Changes are in the editors of the articles, discount card
Tuning of interface
Errors at the use of authorizing of operators

Printing in COM-port
Use of template *.RTF for printing of price-lists
Additional menu "Run"
Formatting of check(tuning of printing)
Limitation of rights is in CashFront

9Integration of CashFront with other SOFTWARE

Comparison of touch screens
Acoustic Pulse Recognition(APR) is unique sensory technology
IntelliTouch is technology of superficially-acoustic waves (FALLING)
AccuTouch is capacitance-resistance sensory technology
How to choose a barcode scanner?
Terminal of collection of данных- that needs to be known
Equipment and SOFTWARE for automation of trade
About automation of trade in modern shops
Connecting customer display
Utility of RunAs : simple starter of appendixes

Defence of passwords
How to transform PDF file in Word
Limitation of directory rights in OS of Windows 7
Tuning for OS of Windows 7 and Vista
New in the bar-coding
Are the cash programs a helper or hindrance?
About discounts

Repair of computers is in Chernivtsi.

Do not miss our news!